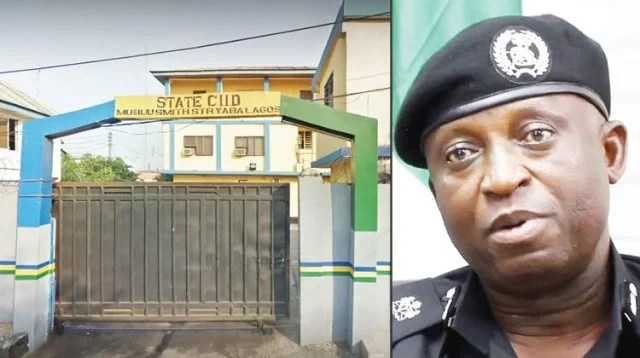 A 29-year-old lady identified as Jennifer Madueke has been arrested by the Lagos state police command over a missing service pistol belonging to the Denton Divisional Police Officer, CSP Adegoke Akinlade.

Punch reports that Madueke and Akinlade were said to have once dated and separated after the police officer was transferred out of Lagos over seven years ago. After the officer was posted back to Lagos, the lovers did not return to the relationship as they lost each other’s contacts but sometime in 2021, they met and exchanged phone numbers.

A source told the publication;

“That was when the DPO, who was married, proposed that they continue with the relationship. On Friday, August 27, he invited the lady to his office and slept with her till Saturday morning. He released her to go around 5am and even saw her off to the bus stop.

They did not see each other again until last Saturday, September 4, when he invited the girl and told her they should go out.

However, when she went to see him, he detained her and accused her of stealing his service pistol. He kept her in his cell till Monday, September 6. While the girl was in the cell, he asked his boys to torture her to make confessional statements.

“On that Monday, he took her to an herbalist on Jebba Street, Ebute Meta, around 8am. The herbalist told him that it was the girl that took the pistol, but she denied the allegation. It was from there he took her to the SCIID, Yaba, where she has been detained till now”

Akinlade, who confirmed losing his pistol, however, insisted it was taken by Madueke, who he claimed also stole N50,000 from him. He denied sleeping with her in his office or taking her to any herbalist.

“She was my girlfriend in 2011, but we separated. About one and half months ago, while I was around the Stadium area, she came to greet me and that was how she knew where I was working and she started coming. When her coming did not favour me, I told her not to come again.

“On that Friday, I was at a club with one of my friends. It was there a girlfriend came to meet me. Then this lady came later. I never knew that she had a mission. I sent her away and said I was busy.

“The other lady with me told me that she was going to Bariga. She also came, but said she could not get a vehicle to her residence that night because it was late. I then left them (both ladies) in the office and went out on a night patrol.

“It was then I started thinking I would go back and wake them up. When I returned, I gave her N4,000 (transport fare) to go.”

When asked if he slept with Madueke, he said

“When two people are in my office? I did not sleep with her. I left them there. Unknown to me, she had gone to pick a bag behind my chair. It was when she left that I discovered that my pistol was missing with N50,000. I did not even care about the money, but I started calling her, and she did not pick the calls. She also blocked me on WhatsApp.

We went to prayer houses and consulted alfas, me and the other girl, but we did not find her. I did not see her for one week. I paid people who tracked her.”

R. Kelly To Spend The Rest Of His Life in Prison, found guilty of sex trafficking, child pornography

6 hours ago1 comment
R. Kelly has been found guilty of federal racketeering and sex trafficking charges by the Eastern District of New York,...

4 days ago3 Comments
A couple and their daughter have been arrested while their son, who is on the run, is wanted over the...

4 days ago4 Comments
The Katsina State Police Command has arrested three female members of a syndicate supplying fuel to bandits in a forest...

Bobrisky reveals how much Tonto Dikeh is owing him and what she asked her to do to her Ex-Husband, Olakunle Churchill’s wife, Rosy – Watch Video

4 days ago4 Comments
Nigerian male-crossdresser, Bobrisky has continued to drag his ex-bestie, Tonto Dikeh, following the crash of her relationship Tonto Dikeh and...

4 days ago4 Comments
The Edo State Police Command has arrested five more persons allegedly involved in the abduction and gruesome murder a lawyer,...

Few weeks after her exit from #BBNaija, Tega cries out about difficulty in marriage

‘I humiliated you publicly, please forgive me’ – Bobrisky begs Tonto Dikeh days after calling her out

“But why is she so pained?” – Reactions as Angel tells Pere that Whitemoney’s laugh was fake and he isn’t happy to see them back

“Now that we are 6 finalists, Whitemoney can’t win the show” – Angel says as Cross reveals they’ve chosen WhiteMoney as the winner already

R. Kelly To Spend The Rest Of His Life in Prison, found guilty of sex trafficking, child pornography

BBNaija 2021Entertainment I’m thinking of how to get the youth to replicate the energy they’ve for BBNaija to 2023 general elections — Hon. Shina Peller

Hello guys , register on Hitng for free start commenting on post and the top 3 users get a reward.