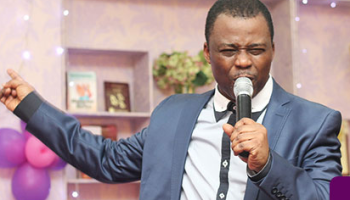 The Founder and General Overseer of Mountain of Fire and Miracles Ministries (MFM), Daniel Olukoya, has said Nigeria can only overcome its problems with God’s intervention.

Olukoya said this on Sunday at the international convention and 30th anniversary of the MFM held at its Prayer City, along Lagos-Ibadan Expressway.

According to Olukoya, if Christians could pray more, the country would be in a better position.

He said, “We need divine intervention as a nation but I’m a believer of one Nigeria and I believe God has a purpose for where we are. I keep telling people that if we look at the map of Africa, it looks like a gun and Nigeria is at the trigger end of it, so God has a purpose for us and I believe if Christians pray more and do what they should do, everything will be fine.”

Oluwatobiloba EmmanuelJanuary 27, 2020
32
Top nominee Lizzo kicked off the 2020 Grammys on Sunday with a tribute to the late basketball legend Kobe Bryant,...

Oluwatobiloba EmmanuelJanuary 26, 2020
33
Legendary basketball player, Kobe Bryant, has died in a California helicopter crash on Sunday. According to TMZ, the 41-year-old was...

Oluwatobiloba EmmanuelJanuary 26, 2020
38
Worried by the incessant outbreak of fire in states in the country, the Ekiti State government has said the state...

Oluwatobiloba EmmanuelJanuary 26, 2020January 26, 2020
43
In response to the ongoing news stating that Leah Sharibu has given birth to a son fathered by the Boko...

BREAKING: Leah Sheribu Gives Birth To Baby Boy For Boko Haram Commander After Being Forced To Convert To Islam

Oluwatobiloba EmmanuelJanuary 25, 2020
74
The source said Leah, who refused to renounce her Christian faith, was forced to accept Islam before being married to...