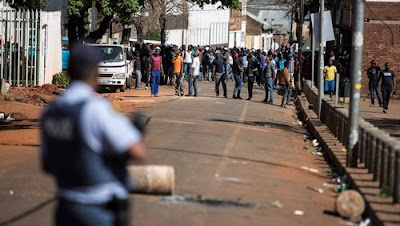 Catholic Bishops of Southern Africa have responded to the xenophobic attacks in South Africa.

The Bishops told the South African government that it lied when it said the recent attacks on foreign nationals in the country was not being xenophobic, but the work of criminals.

“Once again we receive reports of the authorities doing very little to protect the victims. We received report of police standing by idly in Pretoria while shops were looted and people attacked. Not a single arrest was made on that day.

“Once again the authorities resort to the old explanation: that this is not xenophobia, but the work of criminal elements.

“Let us be absolutely clear – this is not an attempt by concerned South Africans to rid our cities of drug dealers. And this is not the work of a few criminal elements. It is xenophobia, plain and simple. If it was about drugs, why are South African drug dealers not being targeted as well? Are we really to believe that there are none?

“And why are drug addicts who rob people in our city centres to get money to buy drugs not being targeted? If it is the work of a few criminal elements, why are South African owned businesses not being looted as well?

“The teaching of the Church is direct and uncompromising. More than 80% of South Africans claim to be Christian. What are our religious leaders teaching the multitudes that fill our Churches every Sunday? Galatians 3:28 says: “There is neither Jew nor Gentile, neither slave nor free, nor is there male and female, for you are all one in Christ Jesus.” By the same token, there is neither South African nor Nigerian nor Ethiopian. We are all one in Christ Jesus.

“God makes it absolutely clear that He has a special concern for refugees, migrants and strangers. Deuteronomy 10:18 says: “He defends the cause of the fatherless and the widow, and loves the foreigner residing among you, giving them food and clothing.” He isn’t just concerned about the foreigners. He loves them.

“Jesus goes even further. Matthew 25 says: “I was a stranger and you welcomed me”.. He identifies directly with strangers. By welcoming a refugee or migrant, we are welcoming Jesus Himself.

“In his scathing attack on the inactivity of people of good will to do anything against the Nazi tyranny in Germany, Pastor Martin Niemoller said:

“First they came for the socialists, and I did not speak out—

Because I was not a socialist.

Then they came for the trade unionists, and I did not speak out—

Because I was not a trade unionist.

Then they came for the Jews, and I did not speak out—

Because I was not a Jew.

Then they came for me—and there was no one left to speak for me.

“I appeal to all people of faith, and all people of good will, to speak out and take action. In the words of St Francis: ‘Make us channels of your peace’.

Pay Attention: My hubby ties me on the bed before having s*x with me.

“My prayer is that God will fulfil his promise made in Ezekiel 36:26: ‘I will give you a new heart and put a new spirit in you; I will remove from you your heart of stone and give you a heart of flesh.’”

Pay Attention:- 7 Ways To Identify A Real And Fake Native Doctors To Avoid Wasting Your Money And Time.Click Here

Kehinde MatthewNews
The Federal Government has ordered that all routes leading to the Eagle Square be blocked from midnight on Wednesday September...

Kehinde MatthewNews
One Charles Nkubi has been arrested for allegedly killing a man after he caught him having sex with his wife...

Kehinde MatthewNews
A 27-year-old man escaped death after he was attacked by a suspected ritual killer in Ibadan, the Oyo state capital....

Kehinde MatthewNews
Two staff of Hongao Mining Company Limited have been arraigned in court for removing a seal on the firm’s mining...

Kehinde MatthewNews
Troops of “Operation Accord” have killed two bandits and also arrested three others at Dajin Kajuru in Kajuru Local Government...

Bobrisky Shows Off His ‘Standing Breasts’ In New Video

Engagement ring? Guests scream as Ike presents Mercy with a small box during her party (Video)

‘I am best rapper the streets have ever heard’ – Rapper Erigga

‘Big Brother is the biggest platform ever’ – BBNaija’s Ka3na

Engagement ring? Guests scream as Ike presents Mercy with a small box during her party (Video)

‘I am best rapper the streets have ever heard’ – Rapper Erigga